Home
One Week In Stockholm

One Week In Stockholm 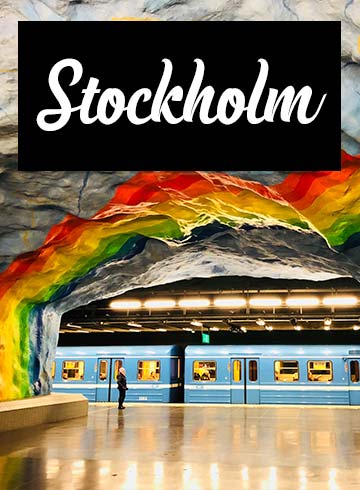 Welcome to One Week In Stockholm, the handwritten guide. We are here to help you plan your Stockholm trip a bit smarter and with much less hassle.

Excited? You should be, there’s a lot to explore.

We are keen to share here our best insider tips to spend One Week or simply a weekend in Stockholm.

We want to start with a simple intro to the things you need to know before coming to Stockholm.

Language Spoken: Swedish is the official language in Sweden. It is a North Germanic language and relates to Norwegian and Danish languages. However, English is also very well-practiced by almost everybody. It will be rare that you will be served in a restaurant or cafe who doesn’t speak English.

Other minority languages are Finnish, Meänkieli, Sami, Romani, and Yiddish.

Known for: Stockholm is known for many things. These include the world’s first open-air museum and the Globe Arena – world’s largest hemispherical building. The Royal Palace Drottningholm and The Woodland Cemetery are its two UNESCO World Heritage sites.

Accommodation: You will find plenty of accommodation options around the city. From luxury hotels, fancy boutique hotels, or funky hostels, you have a long list to choose from.

Find more details in our where to stay in Stockholm section below.

Public Transport: Getting around is Stockholm is made easy through its public transportation. The subway network is efficient and still operates through the night until the weekends.

Safety: Stockholm is a very safe city to explore even for traveling women as well as solo-travelers. However, as it increases to attract tourists, the number of pick-pockets and scammers have also increased.

That is why you should stay vigilant and alert at all times especially in places that are crowded such as bus and train stations, shopping areas, and most-visited sites. And if you ever see a street fight, stay away and do not get involved in the scene.

Tip: Security guards and bouncers are allowed to use force on you, legally, when the situation calls for it.

City name: Stockholm is also called “World’s Smallest Big City” or “World’s Biggest Small Town”. It is sometimes referred to as “Venice of the North”.

2. Where to stay in Stockholm

Stockholm is the largest city in Sweden and is called Venice of the North. With its interesting history, charming landscapes, and great architecture, it draws millions of t